Disco ball (also known as a mirror balls, glitter balls, or sparkle balls) has been a mainstay on dance floors across the world for over a century. Considering these novelty decorations came around in the Roaring Twenties rather than the age of disco, how exactly did they become a dance floor icon in the 20th century?

The disco ball is a dance hall decoration formed by attaching small mirrors around the outside of a clear acrylic sphere rotated in the ceiling’s center. When spotlights are shone on the disco ball, the ball creates a vivid display as light is reflected from the mirrors on its surface.

They are a great way to liven up the dance floor or even add a little novelty decor to your home. Keep reading to learn more about disco balls and how they’re used.

The Invention of Disco Balls

The disco ball is one of the most iconic pieces of music equipment ever invented. It’s easy to see why these mirrored orbs are so popular for dance floors, as they create a magical experience that can’t be found anywhere else.

Audiences of all ages love disco music. Whether it’s the 1970s classic hits or modern remixes, there’s just something about that upbeat sound that gets everyone moving on the dance floor.

Keep reading to find out how these shiny spheres came to be a staple at every dance party.

Disco balls became popularized in the mid-1920s in America, but these room decorations go back even further than that. The use of a disco ball was first recorded in 1897 at an annual society party in Charlestown, Massachusetts.

But they weren’t limited to the dance floor even at the dawn of the 20th century. There was mention of a mirror ball used for lighting and ambiance in a sun parlor at the Milwaukee Hospital for the Insane in 1912.

Even now, people still use mirror balls for decor and party lighting.

While a mirror ball was just a novelty at the turn of the 20th century, the rise of jazz clubs and other dancing nightclubs brought a demand for unique indoor lighting, and this made disco balls a hot commodity as the twenties roared on.

The traditional disco ball is not as common in nightclubs as it once was since it is considered somewhat old-fashioned compared to 21st-century club lighting. However, this device eventually inspired many different kinds of dance hall lighting in the 21st century.

A disco ball has also served as the theoretical basis for other types of projected lighting, such as projected Christmas lights and planetarium projectors.

Traditional mirror balls are also being used as tools in new ways, such as a display for complex projection mapping. These sorts of exhibits can be profound art displays but can also serve to pave the way for more complex studies of projection and light. (Source: VICE)

What is a Disco Ball Made Of?

A disco ball can be made from several types of material such as foam, cardboard, or plastic. Transparent plastic acrylic is the most common type of material used in modern mirror balls for several reasons:

What Are Disco Ball Mirrors?

The mirrors on a disco ball are composed of a series of tiny mirrored tiles known as plane mirrors. (Source: Sciencing) These glass mirrors are responsible for projecting reflected light around the room when the disco ball is operated. Most mirror balls are designed to rotate so that spinning mirror reflections are cast around the room.

The mirrored tiles on a disco ball are pieces of glass with a reflective coating. Aluminum is the most common coating used to coat glass mirror tiles. (Source: Glass Doctor)

What’s Inside A Disco Ball?

Most disco balls don’t have anything inside them. Disco balls are usually designed to be hollow to reduce their weight as a ceiling ornament. Since the reflection of the mirror ball is determined by the outer layer of the ball, the inside doesn’t matter.

Many electronic, modern-day versions of the mirror ball may house internal electronics and shine lights out from within the ball rather than having light projected onto them. These devices are often called disco lights, party lights, or disco lamps. (Source: Music Critic)

How Heavy Is a Mirror Ball?

The weight of a mirror ball varies because there are different sizes of mirror balls. Disco balls can be small enough to hang from the rear-view mirror of a car to the giant 2014 Bestival Disco Ball in England over ten meters across. (Source: BBC)

The weight of a mirror ball also depends on the materials used in the rod, the mirror tiles, and the disco ball’s base.

The average weight of a standard 16-inch diameter mirror ball like the type used in dance halls is between twelve and eighteen pounds.

Anyone installing a mirror ball should make sure that the fasteners used to attach the ball to the ceiling are capable of supporting its weight. A falling disco ball can be dangerous to anyone who might be dancing under it at the time. 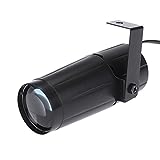 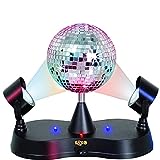 Mirror balls are a simple decoration to put up, which is one of the reasons why they’ve enjoyed such popularity over the past hundred years. To enhance the look of a mirror ball, colored lighting or multiple mirror balls can be used for an even more impressive display. (Source: Hunker)

Disco Balls Are a Timeless Classic

Even though traditional disco balls aren’t seen as often as they were in the golden age of disco, these balls are still a popular novelty decoration in many nightclubs, restaurants, and homes. There are few decorations in the world that manage to conjure as much nostalgia and visual interest as this sparkling dance hall orb.

Disco balls are a staple at any party. They’re used to create the disco effect, which is when light reflects off different surfaces in an ever-changing pattern and creates that “light show” on the dance floor.

Mirror balls have been around for a while. They have been one of the most iconic symbols of the 70s and 80s. Mirror balls are still going strong today, but they work differently than they did before.

MobileDJBasics.com is a participant in the Amazon Services LLC Associates Program, an affiliate advertising program designed to provide a means for sites to earn advertising fees by advertising and linking to Amazon.com. We also participate in programs from Google Adsense, CJ, Bluehost, Clickbank, ShareASale, and other sites. We may earn a commission when you buy through links on our site.